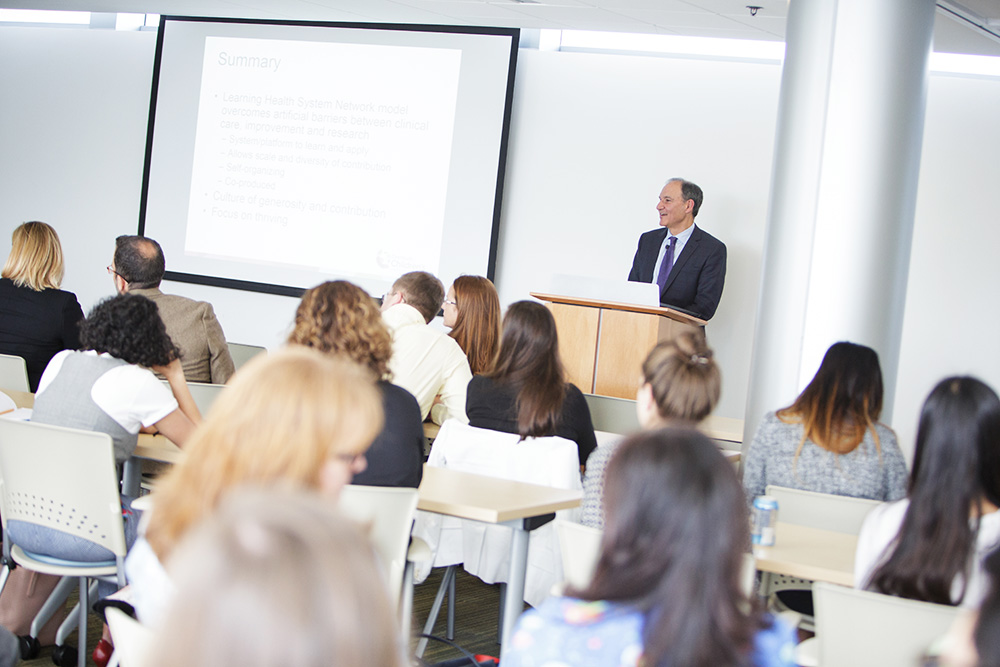 When pediatrician Peter Margolis, M.D., Ph.D., formed the ImproveCareNow network a decade ago to improve the health and care of children with Crohn’s disease and ulcerative colitis, remarkable things began to happen.

Care improved for children in the network with these chronic conditions.

So did health outcomes: In April 2007, when the network was formed, the clinical remission rate for Crohn’s disease and ulcerative colitis among children cared for by network physicians was 60 percent. By April 2018, it had risen to 81 percent.

“No new medications were introduced to this group,” said Margolis, professor of pediatrics and co-director of the James M. Anderson Center for Health Systems Excellence at the Cincinnati Children’s Hospital Medical Center. “Participants worked together sharing knowledge, know- how, and data.”

Margolis, who is scientific director of the ImproveCareNow network, delivered the keynote address to about 50 child health researchers at the University of Florida’s Institute for Child Health Policy (ICHP) 2018 Research Day on April 5. The network now includes about 1,000 pediatric gastroenterologists at 109 care centers in 39 states who care for some 30,000 children with inflammatory bowel disease (IBD), including Crohn’s disease and ulcerative colitis.

Margolis also chairs the PCORnet Steering Committee for the Patient-Centered Outcomes Research Institute (PCORI) in Washington, D.C. In addition, Margolis serves as co-principal investigator of PEDSnet, one of 13 national clinical data research networks (CDRNs) in PCORnet.  PEDSnet is a community of patients, families, clinicians, scientists, and health system leaders who are building a national pediatric learning health system dedicated to discovering and implementing new ways of providing the best care and ensuring the best outcomes for children.

“With ImproveCareNow, we wanted to create a vastly better chronic care system for Crohn’s disease and ulcerative colitis by harnessing inherent motivation, expertise and the collective intelligence of patients and clinicians,” Margolis said.

As an example of how patient collaborations can make a difference, Margolis pointed to two teen patients with IBD who organized a task force through the network to develop a 19-page ostomy toolkit that provides advice and support about living with an ostomy for children ages 10-17.

“They saw a need for information and practical tips for other teens like them and then found a way to meet that need,” Margolis said. The teens and Margolis published “A Guide to Gutsy Living”: Patient-Driven Development of a Pediatric Ostomy Toolkit” in the April 2018 issue of Pediatrics.

Another patient, 9-year-old Zach, became an educator when he and his father made a YouTube video for other patients demonstrating how Zach could insert his own nasal feeding tube.  Zach was so calm and matter-of-fact about it that soon clinicians in the network began challenging themselves to self-insert a nasal feeding tube so they would know what it was like for their patients.

“In ImproveCareNow, research is driven by and for the community – all the people in it—including patients and their families,” Margolis said. “When the learning cycle is fully operational, research influences practice and practice influences research.”

More than anything, Margolis said the ImproveCareNow network shows how large, complex networked organizations can produce better health outcomes through collaboration, and how participants who share access to resources can adapt the resources of the network to their own local needs to solve problems.

By participating in ImproveCareNow we are all trailblazers in creating a new model of what’s possible in health care when we all work together,” he said.